A desperate call has pierced the silence of Hive Secundus. Thought to be a dead city and ignored by the rest of Imperial command, the Space Marines of the Ashen Ghosts chapter dispatched a small detachment to investigate the hive. Now, after weeks of vox silence, an urgent call to arms has been heard all across the world of Janus - even by their enemies - as a facility of extreme importance has been discovered. Several forces now converge on the desolate city, eager to uncover the secrets buried underneath.

Having now established his supply lines and with the backing of the divine, Kratus now seeks to further his own personal glory with the Eye of the Gods and Assassins Agendas.

This battle was played using the Catastrophe mission pack, since we had an uneven number of players show up for this week's games. The mission had three objective markers that players had to perform an Action on for VPs. After an objective has been activated three times, it is removed from the table. In addition, our campaign rules had each player place an extra objective each in No Man's Land, which players could perform an Action on for some free uses of certain Requisitions (another mechanic to encourage players to increase the size of their forces).

Between the mission and the campaign secondary, the dice gods obviously wanted us to gather as many supplies as we could! The three armies clash in an abandoned supply depot as they flow into the city.

In Catastrophe missions, players can roll off to get first turn, but can also bid extra CPs to roll extra dice and choose the highest. Since I got a couple of bonus CPs from Crusade Blessings. I decided to spend them on gunning for first turn. What I hadn't taken into account was that the player who got first turn also got last pick for deployment zone. I got first turn, followed by the Necrons and then the Knights, but it meant that I also got the worst deployment zone. Whoops.

Deciding to throw caution to the wind, Kratus, Baruda and the Terminators march directly against the Knights.

On the right flank, Dreior's Berzerkers and the Spawn are sent on a delaying action to hold back the Necrons for as long as possible, and maybe nab some objectives and/or supplies while they are at it.

Before the first turn, I use Apoplectic Frenzy on the Terminators and Berzerkers to get a strong position early on. I had hoped to grab the supply cache (#3), but turns out my pre-measuring didn't take into account the movement lost from traversing the pipes, so I ended up just holding position behind cover.

Note: the three skull objectives are the mission objectives. The orange markers are the campaign supply caches, and the black #6 is for the Necrons' Agenda.

Baruda calls upon one of his daemonic patrons, muttering an Illusory Supplication prayer that cracks reality. All who look upon the Terminators would see them as if they were reflections from a shattered mirror, making it markedly harder to aim at them. This proves extremely fortunate, as both players hurl what firepower they can at them - but despite the fusilade, only one Terminator is downed and another suffers minor injuries.

The Knights bellow an oath and charge towards their hated foes.

Meanwhile on the right, the Necrons lumber forward cautiously, sending long-ranged firepower at the Terminators while focusing their short-ranged weapons on the Berzerkers. Despite their frenzy, the Berzerkers instinctively know how best to use their cover, and only two of them are flayed to atoms. Those were some hot dice.

Meanwhile, poor Bardul is torn apart by some Praetorians.

Against my opponent's better judgement, he decides to go all-in on trying to wipe out the Terminators. It doesn't help that he has a Khorne daemon whispering in his ear to dooo itttt.

He swings first with his big knight, Prince Arthur, cleaving apart two more of the priceless suits of armour. I opt to interrupt, destroying one of the Armigers (though only just!) and causing some superficial damage to Arthur. His other Armiger butchers another Terminator.

That Illusory Supplication is absolutely amazing...

In my turn, Kratus demands that Arthur's head belongs to him and he charges the enemy warlord. Baruda, continuing his prayer, charges the Armiger.

The Berzerkers on the right also make a bee line for the Necron warlord - they saw the big, shiny dome and demanded to claim it for Khorne. However, the withering hail of fire from the Necrons was still pouring towards them, causing them to falter in their charge. Oh no.

Kratus leaps upon Prince Arthur's chassis, mag-locking his boots into place as he sweeps the enemy's torso with his chainfist, before being knocked down by the Knight's own weapons and taking some damage. While on the ground, he sees one of his bodyguard stepping up to the enemy Knight, chainfist blaring and eyes glazed in bloodlust. Not being able to stop him, the Terminator cleaves apart the Knight.

Baruda swings his mighty crozius at the Armiger, similarly damaging the machine while the Terminators likewise finish it off. A couple more veteran Terminators are sliced apart in the melee.

In my opponents' turns, the Berzerkers - no longer with the protection of cover - are predictably flensed and a Terminator takes a couple of wounds.

The Cultists are almost wiped out, but a handful are left alive - enough for five more to join them with the Tide of Traitors Stratagem and nab an objective. 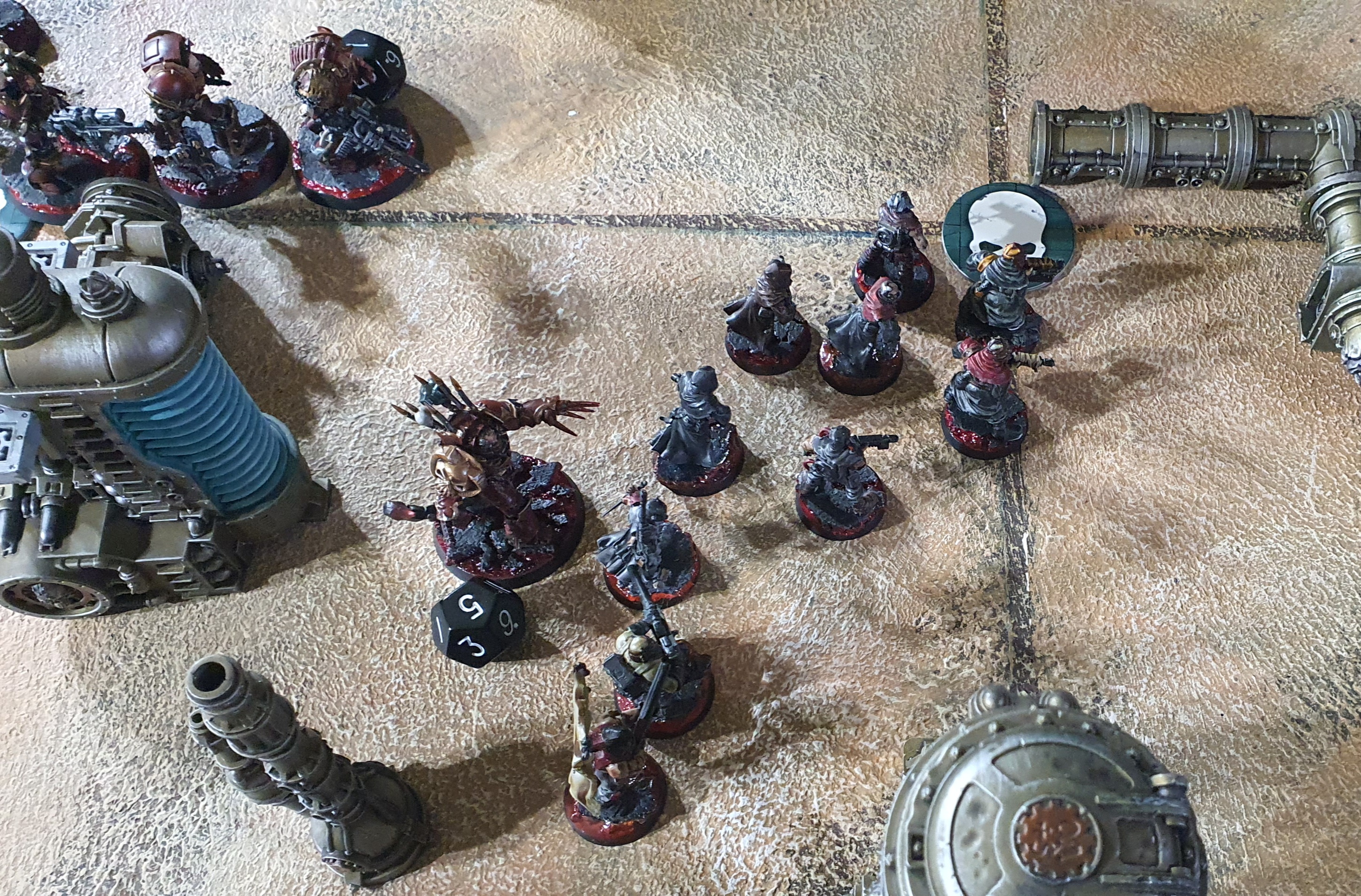 Baruda's singing voice is a little worn out and his prayer finally fails. He takes up position behind cover and begins picking up supplies.

Unfortunately, having a worn-out, ragtag force facing an almost-fresh Necron army was never going to end well. His warlord teleports away to grab his Agenda objective, and the whole force rounds on my little army.

Not pictured: the Knight player still has a single Armiger left, and we make a pact not to chase each other down while we deal with the Necrons. He promises, however, that if there is one Terminator left then he will be firing everything at it.

Unsurprisingly, the meatbags are easily disintegrated. This, unfortunately, leaves Kratus unprotected, and he also meets his end (for now) at the business end of the Necrons' shooting. One more Terminator is also killed.

In desperation, I hurl my final two Terminators at his Praetorians, wiping them out handily...but leaving them dangerously close to the Skorpekh Destroyers.

Elsewhere, Baruda tries to keep the World Eaters in the game by performing an Action on his nearby objective.

In the Necron turn, the Terminators' rampage is finally ended and they are wiped out, and the Dark Apostle and his buddies are unable to hold against the overwhelming Necron firepower.

Faced with the unending Necron horde, all injured World Eaters pull back to secure what few supplies they could retrieve.

After the battle, Kratus suffers a Devastating Blow, though thankfully only losing 1XP. Dreior's Berzerkers likewise suffer some permanent casualties, causing his unit to lose 3XP.

By far the worst effect is suffered by Murdax's Red Butchers who, despite carrying the battle for me, are heavily punished by Kratus for failing to heed his orders to leave the trophy kill to him. They gain the Battle-weary battle scar, causing them to not only be unable to perform Actions, but it limits them to 1XP per game! This is a terrible result for them, since they would've gained several XP this game.

Yes, out of the six units that were destroyed in this battle, three of them fail their Out Of Action tests. Oof.

On the positive side, I mark Baruda for greatness for his effort in protecting the Terminators and he gains a rank. Since he is walking the Path of the Righteous, I roll for a Battle Trait from that supplement, which ends up being Detestation, making him immune to psychic powers (!!). I also use my Dark God Favour to give him the Chaos Boon Daemonic Flesh in addition, which grants him and his buddies +1 Toughness.

Not content to leave it there, I spend a couple of RPs to give him the Eternal Vendetta warlord trait and granting him the Mantle of Traitors relic. This WLT would solidify his purpose as a support character, allowing him to select an enemy unit for nearby allies to kill super hard, while the relic would mainly be used to get a big discount on the Fell Prayers stratagem in a pinch.

I also picked up two supply caches during the battle, per our campaign rules, which I use to expand Gorm's Berzerkers to eight men and gave them a couple of plasma pistols.